The people of Akpugo in Nkanu West Local Government Area of #Enugu State on Thursday came out en masse to celebrate #Governor Ifeanyi #Ugwuanyi for his special love for them which they said the governor demonstrated when his administration constructed the first state government road project in the community after years of neglect by past administrations.

Gov. Ugwuanyi during one of his routine visits to communities inspected the then deplorable Ogonogoeji-Ndiagu-Akpugo rural road (from Atavu Bailey Bridge to Afor Onovo), and promised to construct the road, regretting that the community had not witnessed any development by the state government in the past, which he fulfilled. 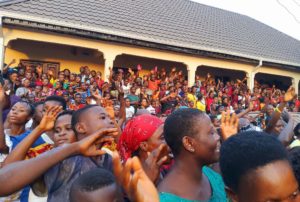 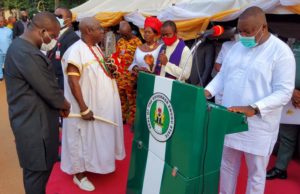 Speaking when the governor visited Akpogu, on Thursday, to inaugurate the asphalted 1.9km Ugwuagba-Achikpa-Onicha Agu Road in Ogonogoeji-Ndiaga, the Chairman of Nardo Group, Chief Bernard Edeh, an illustrious son of the community who executed the project, disclosed that the governor’s special love for the community, which was evident in pioneering development in the area, spurred him to undertake the road infrastructure in support of his administration’s rural development programme in the state.

According to him, “In the history of Enugu State there is nobody that can say that a sitting governor has visited Akpugo more than seven times except Gov. Ugwuanyi; it has occurred before me. I am saying that it is a thing of joy and thanksgiving that this governor (Ugwuanyi) has special love for this town; and the governor has not been coming to this town in vain. 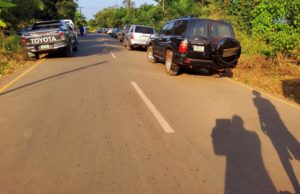 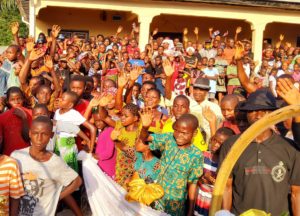 “He has been coming and working. I am overwhelmed by the crowd, youths and women that are gathered here. Our governor merits it; our governor deserves it hundred times.

“The love you have for us, you won’t regret it. Truly we had governors that ruled this state in the past; Akpugo owes you nothing but it touched your mind to do this (road).

“I looked and said that since you can do this for us that I will do the little I can to support you and to show you that we are solidly behind you”.

Chief Edeh told Gov. Ugwuanyi that the pioneer road his administration constructed in the community has attracted development and other good things to the area.

He thanked the stakeholders of Akpugo and Nkanu West LGA for their presence and support.

In his goodwill message, the former Inspector General of Police, Ogbonnaya Onovo (Rtd.), an indigene of Akpugo, equally extolled Gov. Ugwuanyi for his special love for the community, describing him as “a man who is committed to humanity; a man of truth; a man of justice and honesty”.

In his words: “We have had governors in this part of the world prior to his (Ugwuanyi) tenure but it is since he came into office that things started happening in Akpugo.

“In case you have forgotten, our roads were impassable. Our children in terms of capacity building were nowhere. There was no government presence in the whole of Akpugo before he came in, yet we had leaders who came from this part of the country and nothing happened.

“Today our boys are getting appointments into government positions. You have brought democracy dividends down to the grassroots and your name says Gburugburu because you are for everybody.

“It is this clarion call that he (Ugwuanyi) made to our people to come back and help as much as we can; that was one of the reason people like Chief Bernard Edeh (Nardo) came back, saw what was happening and decided to put this road”.

In their separate remarks, the member representing Nkanu East/West Federal Constituency, Hon. Nnolim Nnaji and the Chairman of Nkanu West LGA, Hon. Nwabueze Nnamani equally commended Gov. Ugwuanyi for his remarkable interventions in the community, which they said encouraged Chief Edeh to undertake the road project, urging other stakeholders to emulate the gesture as no government can do everything for the people.

Inaugurating the road, Gov. Ugwuanyi who heartwarmingly described the contribution of Chief Edeh in complementing the efforts of his administration in rural infrastructure development as “exemplary and commendable”, added that “our administration commits to fully identify with such projects that bring succour to our people”.

Recalling that he had inaugurated an asphalt concrete road a few years ago and lately flagged off the construction of another asphalt concrete road, all financed by public-spirited persons from this part of the state, the governor therefore enjoined all well-to-do and public-spirited citizens of the state to take a cue from these laudable developments.

“The good people of Akpugo and entire Nkanu West, you have, as always, treated me to a very warm reception. Your sentiments of support and solidarity have been unwavering over these years and are highly appreciated. I leave you with my best wishes for a wonderful 2021 Yuletide for all of you”, he said.

There seems to be no end in sight of...
Read more
National News