Nigerians will vote for APC massively in 2023 because of Buhari Legacies.Maxwell Gowon

A leading aspirant to the office of the National Youth Leader of All Progressives Congress,Barr.Maxwell Gowon has expressed his optimism that the party will win the produce the next Nigeria’s President,Governors and win more offices at the National Assembly,and state Assemblies across the country in the forthcoming 2023 general elections,Maxwell was speaking in Abuja during an interactive session organized by members of Buhari APC Youth for democratic Legacies defence.Maxwell equally urged members of group to prepare for the battle ahead as many evil Forces will arise to discourage any initiative that of good intentions for the unity and Progress of the Party.Speaking earlier whilst welcoming members to the interactive meeting, the coordinator of Buhari Legacies,Barr. 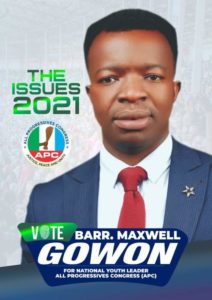 Yusuph West Dayo, urged members to brace up for the defence of Buhari legacies and the party.He further called on members never to relent,especially now that the forces of opposition are out to destroy and mislead Nigerians with their Campaign of calumny against the lasting legacies of Mr.President.

Members of the group were drowned from the six Geopolitical zones of the country gathered to Brainstorm on the successes recorded by President Muhammadu Buhari and APC Government for past six years.

Members suggested how the APC Legacies can be defended from the Local Government,States and Federal levels.

Three persons have died in an auto crash on...
Read more
Uncategorized

Welcome to WordPress. This is your first post. Edit...
Read more